hunslet engine company website
1444) is preserved at the, This page was last edited on 1 July 2022, at 18:57. During the Second World War, the company again served the country well in the manufacture of munitions, but they also built engines, both steam and diesel for the war effort. During World War I, the company, like many others, found itself employing women on the shop floor and engaged in the manufacture of munitions. While some companies couldn't be saved their designs and goodwill could be passed on to other companies within the association thus helping other manufacturing firms. Following reorganisation a number of companies traded under the Hunslet name. Many other 'large-engine' orders were received in these inter-war years. The firm became a limited company in 1902 but the Campbell family and later the Alcock family retained control. [7], In 2004 the Hunslet Engine Company was acquired by the LH Group production was moved to Barton-under-Needwood; whilst other operations remained in Leeds.[8][9][10]. [8] The same year saw the completion of several orders for underground and mining diesel locomotives. In 1871 James Campbell and his brother George Campbell bought the company for 25,000. Bagnall Ltd, Stafford; Andrew Barclay Sons & Co. Ltd., Kilmarnock; Beyer Peacock & Co. Ltd. Manchester; Dubs & Co, Glasgow; Fox Walker & Co, Bristol; R.& W.Hawthorn, Newcastle; Hudswell Clarke & Co. Ltd, Leeds; The Hunslet Engine Co. Ltd, Leeds; Kitson & Co, Leeds; Manning, Wardle & Co. Leeds; Nasmyth Wilson & Co, Patricroft; Naysmith, Gaskell & Co, Patricroft; North British Locomotive Company Limited, Glasgow; Peckett & Sons Ltd, Bristol; Robert Stephenson & Co, Newcastle on Tyne; Robert Stephenson & Hawthorns, Ltd, Darlington & Newcastle on Tyne; Sharp Stewart & Co, Glasgow; The Vulcan Foundry Ltd, Newton le Willows; Yorkshire Engine Co. Ltd, Sheffield[2][4] [note 1], Many short wheelbase 0-6-0T locomotives were supplied to the Manchester Ship Canal Company in the 1880s.[1].

During the Second World War the company manufactured munitions as they had done during the First World War. 243 Preserved and currently undergoing cosmetic restoration at the, No. Two of these still operate on the Ffestiniog Railway while Charles is preserved in the Penrhyn Castle Railway Museum. The Hunslet Engine Company was founded in 1864 at Jack Lane, Hunslet by John Towlerton Leather, a civil engineering contractor, who appointed James Campbell (son of Alexander Campbell, a Leeds engineer) as his Works Manager. This locomotive has been sold and is housed at the Amerton Railway and is the first steam locomotive built and sold by Hunslet in 37 years. Throughout the 1930s, Hunslet worked on the perfecting of the diesel locomotive. This quarry was linked to Port Dinorwic by a 4 ft(1,219 mm) gauge line for which Hunslet built three 0-6-0T engines Dinorwic, Padarn and Velinheli. A total of 485 Austerities were built by Hunslet and other builders between 1943 and 1964, of which over 70 examples have entered preservation. The post of works manager was advertised and Edgar Alcock, then assistant works manager at the Gorton Foundry of Beyer-Peacock, was appointed in 1912. Other customers included collieries. On learning that the London & North Western Railway were supplying locomotives to the Lancashire & Yorkshire Railway and were looking at supplying to other railways Charles Sacie of the Yorkshire Engine Co in Rotherham wrote to many of the other independant locomotive manufacturers and a meeting was called on the 29th April 1875. The last three Austerities were sold in 1970; one directly to preservation, one for scrap and one to the NCB.[4]. The first Hunslet engine built for export was their No. Richard Peacock of Beyer-Peacock. [18] In 2021, the business was purchased by Ed Murray & Sons. This was true at Hunslet which found its overseas customers asking for very large engines. Alcock came to Hunslet at a time of change when the industry was being asked for far larger and more powerful locomotives than had ever been required in the past. James Campbell was appointed as the Works Manager. 11 Preserved and currently undergoing cosmetic restoration at the, No. It was during the 1930s that Hunslet built their largest locomotives. Between 1865 and 1870, production had averaged less than ten engines per year, but in 1871 this had risen to seventeen and was set to rise over the next thirty years to a modest maximum of thirty-four. Details of a LMA Promotional Film 'The Locomotive' Circa 1949 in the Scottish Screen Archive[2] In 1901, James Campbell was still in charge as proprietor and James's four sons were, by then all working for the company including the eldest son Alexander III who had taken over as Works Manager on the death of his Uncle George in 1890. This engine later renamed Charlie was the first of twenty similar engines built for this quarry and did much to establish Hunslet as a major builder of quarry engines. After the war, trading conditions were very difficult but Hunslet were once more able to attract overseas orders and they also received a series of repeat orders from the London, Midland and Scottish Railway for a total of 90 LMS Fowler Class 3F 'Jinty' 0-6-0T shunting engines. In 1871, James Campbell bought the company for 25,000 (payable in five instalments over two years) and the firm remained in the Campbell family ownership for many years. 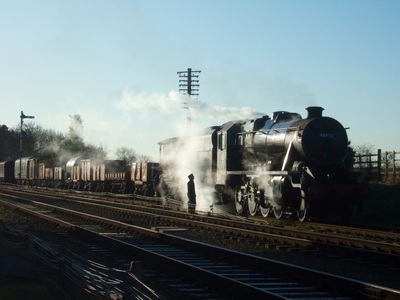 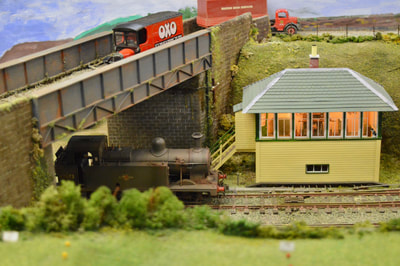 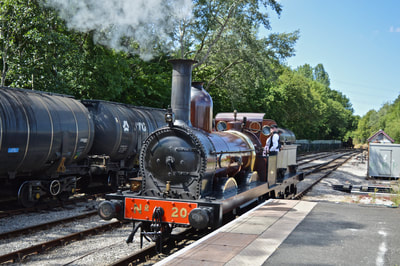